A Centenarian’s Advice to Young Women: Figure Out What You Want 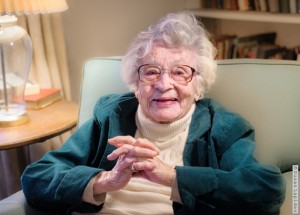 A conversation with Marion Cannon Schlesinger about feminism, privilege, Julia Child, and the Kennedy era.

“Just go ahead and do your thing no matter what,” says Marian Cannon Schlesinger to today’s young women. At 101 years of age, she is still painting, writing, watching Rachel Maddow, and reading two newspapers a day.

As we approach the fiftieth anniversary of JFK’s assassination, many of the people who can recall the era in detail have passed on. Marian Cannon Schlesinger was married to Arthur Schlesinger Jr., historian, speechwriter and special advisor to President John F. Kennedy, living in D.C. and raising four children during his Washington years. Well-traveled, having studied in China prior to their marriage, she returned to Cambridge, Massachusetts after their divorce. She has written and illustrated five children’s books and, in 2012, published the second volume of her memoirs: I Remember: A Life of Politics, Painting and People.

I sat down with her recently to hear about her time in Washington, memories of being raised an “academic child” at Harvard, advice for independent women, and recipes for leading a “full life.”