Banda Sisters – In one of India’s poorest regions, hundreds of pink-clad female vigilantes are challenging male violence and corruption. 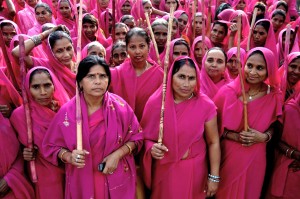 Gulabi means pink, and refers to the electric shade of the uniform worn by the 500-plus members, who hail from Banda’s arid villages. The women have become folk heroes, winning public support for a series of Robin Hood-style operations. Their most daring exploit was to hijack trucks laden with food meant for the poor that was being taken to be sold for profit at the market by corrupt officials.

The targets of the Gulabi Gang’s vigilantism are corrupt officials and violent husbands. The gang has stopped child marriages, forced police officers to register cases of domestic violence – by slapping them – and got roads built by dragging the official responsible from his desk on to the dust track in question.