International Women’s Day 2014: The shocking statistics that show why it is still so important 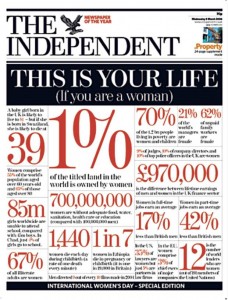 International Women’s Day, like any event that promotes positive discrimination, is accompanied by its fair share of negative remarks.

The earliest Women’s Days were held in the first decade of 20th century. This was before women had the vote, before women could legally terminate a pregnancy. In the UK, it was only ten years since a married woman could legally own her own property, rather than be property herself. Marie Curie was yet to become the first woman to win the Nobel Prize.

More than a century later and it’s tempting to see International Women’s Day as redundant, a celebratory event at best. Why do we need the event at all? The causes that triggered those first campaigns have been fought and won. Women in today’s society have all the equality they could ever need, right? Wrong.