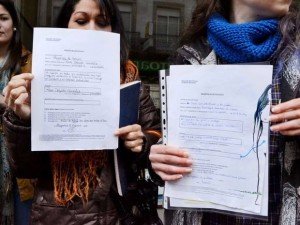 Females across the country are queuing up (and sometimes lying down) to oppose legislation which will limit the availability of abortions. Alasdair Fotheringham in Madrid asks what these so-called registry protests can achieve.

As havens of humdrum state bureaucracy, government commercial registry offices are rarely targets for demonstrators. But this month, queues of women have lined up outside offices across Spain to demand that the largely baffled civil servants within allow them to symbolically register their bodies as their own property, with official certificates to prove it.

From Bilbao, Madrid and Barcelona to Pontevedra and Alicante, the so-called “registry protests” are the latest attempt by women’s rights activists to draw attention to controversial government plans to dramatically limit access to abortion – a move that would create some of the strictest anti-abortion laws in Europe.

“We are saying, ‘If you don’t treat us as real people but as objects then okay, we’ll go to the commercial registry office and have our bodies officially denominated as “property”. Yolanda Domíngez – the Madrid-based artist and activist who originally conceived the “registry protests’” – told The Independent.

Since 2010, Spain has allowed women to seek an abortion up to the 14th week. But the planned changes to the law would make the procedure illegal, except in rape cases, or where two doctors independently certify that a failure to abort would damage the women’s mental or physical health. The governing People’s Party – backed by the Catholic Church – is adamant that access to abortion should be curtailed, with Prime Minister Mariano Rajoy repeatedly pointing to his party’s electoral manifesto, which promised to “reinforce protection of the right to life” for the foetus.

Yet activists say if the law is changed, it would huge step backwards for Spain, putting the law on par with some of the strictest anti-choice legislation in the world and would violate women’s rights over their own bodies.