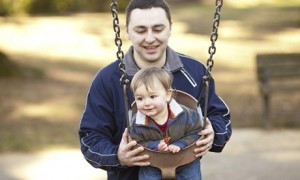 Men already dominate political and corporate hierarchies, but feminism, currently healthier than ever, is doing solid work to support fathers who choose to stay at home with their children.

Do men face discrimination? I don’t mean gay men or black men or poor, uneducated men or even short men. Or, come to think of it, the many judged “typical boys” every day, but just men? All men.

In a world where the male sex makes up just under half of the global population but 83% of all those in power, I would say, probably not. Indeed, in a world where not all countries guarantee women’s equal property rights and 70% of the population living in absolute poverty are female, I’d go so far as to say the suggestion that men face discrimination as a sex is a bit ludicrous.

Which should mean that today’s International Men’s Day, partly designed to end discrimination, is a bit of a joke, a campaign from people whose response to any statistic about women being physically abused or dominated or belitted is to say, “but what about the menz?”

Yet I’m all for International Men’s Day. As a supporter of the idea that men and women should be treated equally, why shouldn’t men have their own day to match the one set aside to promote women and their causes in March? And there are really important issues when it comes to men’s rights. I’d just like to know what causes this day is actually for.